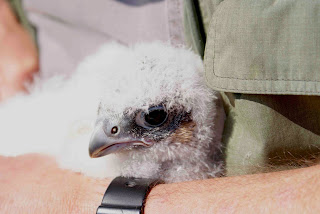 Like many other birds across the UK this year, Peregrines have been breeding later in some parts of the country. While pairs in the London area appear to be on time compared to previous years, those around Bristol are running a week or two later than they were in 2012. By now I would have normally ringed most of the Peregrine chicks available, but this year I am hoping to ring my first today! There are various reasons why this may be happening - it may relate to the condition of the adult birds after a cold winter; the availability of food (ie small birds); the cooler spring temperatures; and natural variation. Despite the late start, the chicks that hatched around three weeks ago appear to be doing well and are growing fast. More photos to follow of this year's young Peregrines.
Posted by Ed Drewitt at 01:50 2 comments:

Just in the past week most Peregrines across the UK have been laying eggs (if they hadn't already!), and interestingly they have been incubating, or at least covering the eggs, from the outset. Usually Peregrines wait until the penultimate or final egg. However, with the recent cold weather Peregrines have been keeping their eggs warm and ensuring they don't freeze.

In Bath, the female Peregrine has laid four eggs over the past week (one every two days), and it will be about four weeks before they hatch. Both parents will help with incubating the clutch. The egg timer is running.....
Posted by Ed Drewitt at 09:56 No comments:

Latest on the Bath Peregrines

Earlier last week, Hamish and Colin were out watching the Bath pair of Peregrines. Hamish spotted them mating for the first time on Tuesday 19th March, and Colin (Hawk and Owl Trust) checked the camera view on the nest box - there was no sign of a scrape or eggs.

And on Wednesday 20th Hamish says,
'No birds on the church at first, but very soon a flock of pigeon lifted from the surrounding buildings as the female came in from the direction of Parade Park, carrying a pigeon which she proceeded to prepare on one of the turrets.  Bath Peregrine Watch veterans will be only too well aware of AA’s (the male) attention to catching and sharing of prey.  In essence, what he catches is his, and what the female catches is his also.  AA flew through a shower of pigeon feathers directly at the female, and amid much vocalising but very little debate, AA was left on the turret with nothing but feathers as the female headed for a gargoyle with her catch.  She proceeded to eat her fill, then flew off to the Abbey, presumably to cache the remains as she returned ‘empty handed’ a few minutes later.

As waterbirds begin travel back to their breeding grounds, Peregrines are ready to snatch any on the move. Little Grebes are migrating across the UK at night, and many will be moving back to other parts of Europe.

This head of a Little Grebe was found in Bath yesterday by Hamish Smith. It was probably a migrant, taken at night as it was flying over the city - city lights mean nocturnal migrants can be spotted by the falcons. Peregrines generally snip the heads off, although sometimes they will open the brain case and eat the brain which is full of nutritious fatty acids.
Posted by Ed Drewitt at 00:53 No comments:

And how about the Bristol Peregrines?

Sam has been keeping a close eye on the Peregrines which nest in Bristol's City Centre. The pair have been seen mating a lot, and we hope to see eggs soon. They copulated twice within the space of nine minutes on the weekend! When they do begin laying, they won't start incubating immediately - eggs will be laid every two days. They will start to incubate once the penultimate or final egg is laid. Anywhere between one and five eggs (three or four most common) may be laid.

At least three pairs of Peregrines nesting in London have already laid eggs. However, this is still relatively early for Peregrines. Most lay in the third and last week of March (and perhaps even into April), although laying dates do appear to be getting earlier.


The photo below by Sam shows one of the Bristol Peregrines on the weekend with a pigeon - this was being used in a food pass. A food pass involves the male catching prey, and handing it to the female in flight.  It is a way in which the male Peregrine shows his mate that he is a capable hunter, and can support her and the chicks over the coming months.

Sam also discovered Golden Plover feathers on the 14th March (see below). Golden Plovers have been wintering around the west, and many will be moving north to begin setting up territories on the moors in northern England, Scotland and Scandinavia. As they move overhead, they make for an easy target for the Peregrines. Sam also found the head of a Chaffinch on the weekend - a common prey item.

What are the Bath Peregrines up to?

Peregrines have been breeding in Bath since 2007 after the Hawk and Owl Trust (HOT) put up a nest box a few years earlier. The current breeding female is paired with her son who hatched in that first year.


Hamish Smith, who keeps an eye on the Bath Peregrines gave us the latest update as they prepare to lay eggs later this month.


"There hasn't been a huge amount of interaction between the pair in the past weeks, but more recently there have been some interesting behavioural changes.

Both birds have been going through the motions of individually perch hunting from the church, but there has been little hunting activity in the vicinity.  It has become routine for the pair to head off in their favoured directions, and to return some time later with a kill.  In the time that I have been watching, there has been no evidence of prey sharing.

In the past ten days, it has been clear that greater attention to detail is being paid to stamping ownership on the nestbox, the church and the surrounding airspace.  Within minutes of the HOT renewing the gravel in the nestbox a few weeks ago, the female entered the box and appeared to be shaping a scrape to her liking.

While the birds have in effect been ignoring one another in past weeks, in the week of Mon 11 March there were increased levels of activity:

Various prey items have been brought in over recent weeks - between us we have found  a fresh Snipe head, various pigeon legs, a pair of pigeon wings, Teal feathers, Brambling feathers and Skylark feathers.
Posted by Ed Drewitt at 00:21 No comments:

Sex on the Peregrines' minds!

It is that time of the year again - Peregrines are thinking about sex.

Peregrines in urban areas have already been spotted mating, although eggs won't be laid until the middle or end of March. In Bristol, Sam has spotted the city centre pair mating over the past few weeks. It is a great way for the pair to strengthen their bond, and for the male to make sure that when the eggs are laid, he is the daddy!

While Peregrines usually nest in pairs, they will sometimes nip off to mate with other Peregrines - this is known as extra pair copulations, and is common in the bird world from Great tits to Swallows. So, a female's clutch of eggs may not always be fathered by her mate.  For her, it is a great way of making sure her young have the best genes possible, while also having a devoted partner to help her rear them!
On sunny days, Peregrines will also be displaying overhead - lots of soaring, circling, and spectacular dives may be in the offering. While at the nest, the female may be testing things out by shuffling around where the eggs will be laid. You may also hear the pair calling to each other - recently described as 'ee-chupping' by the Derby Peregrines Project, the pair may cheap away, giving the odd light grunt in between.

In terms of prey, the Bristol Peregrines have been feasting on Feral Pigeons, Woodpigeons, and the odd Teal throughout February. As we get into March, prey species migrating back to their breeding grounds, such as Redwings, Woodcock, and Water Rail, will begin to appear in the diet again. The male may even impress the female by bringing her some food, and transferring it to her in the air. It is his way of telling her that he is a good provider, and that he will make sure her and the chicks will be taken care of when they need to be fed.