With the recent cold weather, many species of bird, particularly wading birds and ducks, have been moving around the UK and beyond to escape the cold grip of winter. The frozen water bodies and soil means there is no food for them. 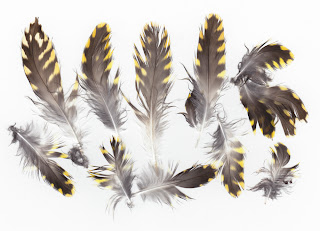 Golden Plovers are scarce around Bristol – the nearest places to spot them are on the southern Somerset Levels, high regions around Bath, and sometimes the odd one on the Severn Estuary. So, it was a surprise to find some taken recently as prey by the Peregrines in Bristol. Sam found these on the 13th after a night of sub-zero temperatures. They are by no means a rare prey item for Peregrines – but over the past decade or so, Golden Plovers have been choosing to winter in the east of the UK, with fewer visiting the west. Studying the Peregrines is a great way of finding out what their prey species are up to.

Golden Plovers have beautiful yellow spotted feathers which keep them camouflaged on moorlands during the summer and in lowland fields during the winter. This photo shows some of the body feathers from the back of the bird. 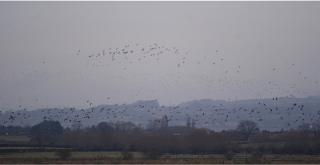 What is even more remarkable is that last week, around the time this bird was eaten, another Golden Plover was caught by a bird ringer in mid-Wales and released with a satellite tag attached to its body. On the weekend just past, the ringer checked the location of the bird – it was in Madrid, Spain! It just shows, that when these cold weather movements occur, many ducks and wading birds literally exit the UK and move south within a few days. I remember being on the Somerset Levels last year during a very cold spell and it was absent of many ducks, Lapwings and Golden Plovers. Remarkably, as soon as the temperatures rose, the birds magically reappeared (see photo above) – presumably moving north again from southern climes. How they know when the ice has suddenly gone is a mystery!
Posted by Ed Drewitt at 09:59 No comments:

Fancy a Woodcock or two for tea?! Peregrines certainly do.

I have been excited by, and interested in Peregrines now for 14 years - and what sparked my interest was looking for what they had been eating. I loved finding various wings, heads and legs of birds below office blocks in the middle of Bristol, and often right outside Pizza Hut! It was an adventure, and I often had to think like a detective to work out what the prey items were from.

Whilst I have less time to actually do the searching these days, Sam has been regularly visiting the Peregrines in Bristol's city centre, and as a result, he has been finding lots of prey (see previous blog). 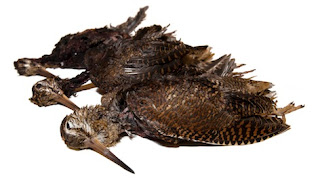 On Thursday evening, Sam was down near the Peregrines' roost site and discovered three Woodcocks on the ground - they had no doubt been blown down by the winds from a Peregrine cache. To ensure they have enough food during cold periods of weather, Peregrines store food. With the recent cold spell, it is likely there was a surge of Woodcocks in the region - escaping colder places further east. Many Woodcocks arrive from the Baltic states and parts of Russia. Sadly, modern buildings are not great for a cache - the dead birds just get blown down like these ones did! In more traditional haunts such as cliffs, they would be hidden in crevices and cracks in the rocks. Its' a remarkable find which not only tells us what the Peregrines are feeding on, but also that Woodcocks are in the area (even though we may never normally see them around).

The cold weather movements by wading birds are common at this time of the year. As wet, muddy woodlands and meadows become frozen across Europe, birds such as Woodcocks head west, where they can find moist and, in relative terms, milder conditions, to feed on worms and other invertebrates. Cornwall, Devon, and even the Western Isles of Scotland are hotspots for Woodcocks in the winter because they are relatively ice free, meaning plenty of worms to feed on! 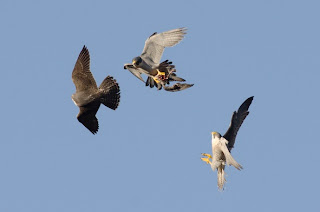 Here you can also see three Peregrines together taken by Sam over Bristol, near where the Woodcocks were found - we reckon this is the city centre breeding pair and their youngster (left), haggling over a half eaten pigeon!

Images by Sam Hobson.
Posted by Ed Drewitt at 05:15 No comments:

Waders on the menu for Bristol peregrines

Since the temperature has dropped in the last week or so, the Peregrines that are often seen around Bristol city centre appear to have become increasingly active. They must have been hunting and caching around the clock, as recently I have found the remains of a much wider variety of prey species under their perches than I have for months - many of which, would have only been flying over the city under the cover of darkness. 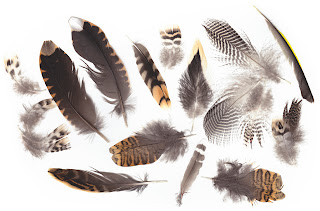 Last Sunday, it was a bumper haul, with Dunlin, Snipe, Little Grebe, Teal, and plenty of more common urban birds like Starling, Redwing, Goldfinch, and Feral Pigeon. Mid-week, I found some Lapwing tail feathers, and this weekend, a male Teal, alongside some nice Golden Plover and Woodcock feathers.

It might be that the cold snap has prompted the increased hunting frequency, and they are busy caching extra food, or it could be that the drop in temperature has caused some movement of waders and ducks.

The only other explanation could be that there is a new bird in town, who is more expert at hunting nocturnally. As Ed mentioned in the previous post, it is important to keep an eye on who’s who at this time of year.

Just recently, I have noticed that a juvenile Peregrine that has been hanging around with the two adults in the centre of Bristol has no colour ring on its left leg. If this was the city centre pair's offspring from this year, we would expect it to be sporting a colour ring on its left leg with the letters FP, clearly visible here. Therefore, this young bird is either FP, and has lost his ring, perhaps after a high-speed strike, or it is a roaming juvenile that has temporarily taken up residence in Bristol. It’s hard to be sure without getting a look at the BTO metal ring on its right leg, but watching its behaviour - particularly its choice of perches that I’ve never seen FP use before - I’m inclined to agree with Ed that it is not a local bird. Frustrating situations like this illustrate why colour-ringing is so important to urban Peregrine studies 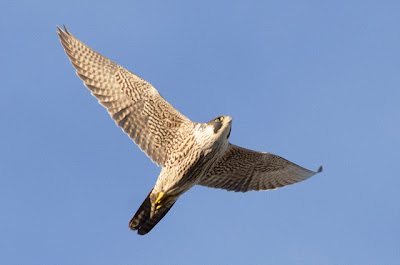 Peregrines are on the move - watch out for who's who

At this time of the year, Peregrines are on the move. Young birds hatched earlier in the year will be travelling around the UK, sometimes short distances, perhaps only a radius of 50 miles; others will be moving much further, up to 120 miles or more.

Urban sites with wintering Peregrines may consist of not just local birds, but falcons from further afield. Of course, they look the same, but with some careful observations of age, sex, and other plumage markings, you may be able to tell the individuals apart. A city centre roost may have four or five individual Peregrines using the site, even though only one or two are seen at any one time. 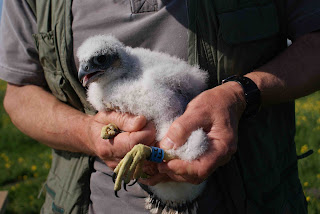 Many urban Peregrines are now marked with colour rings on their legs under a Schedule 1 Licence - these allow the birds to be identified from a distance. Others, particularly those ringed in quarries, may only sport a unique, BTO metal ring (which the colour-ringed birds will also have).

Either way, the rings can tell us a lot about individual Peregrines, from where they have travelled from, to how old they are.  When spotting Peregrines, keep an eye or for their legs and any rings. With a good scope or camera, the colour rings can be read. The metal rings require powerful lenses, but if a bird is close enough, they can sometimes be read too.

Report any rings and their codes to ring.ac and myself! The colour rings I use in the Bristol and Bath region are light blue with black letters.
Posted by Ed Drewitt at 02:03 No comments:

Peregrines wintering in Bristol and Bath 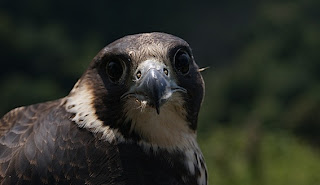 These days you are more likely to see a Peregrine in an English city thank you are a Kestrel or Sparrowhawk.

As we are head in to winter, urban-dwelling Peregrines are spending plenty of time hunting and roosting over towns and cities. Here in Bristol, various Peregrines are using different buildings as their base throughout the city. One pair which raised one chick in the centre of Bristol this year are still around - just the other day they were spotted by Peregrine watcher Sam Hobson.

During the winter, Peregrines will stay close to their breeding territories, but many younger birds (known as satellite birds) will be roam around the UK, and may turn up in areas where during the summer they would normally get chased off very quickly by territorial birds.

Over the next few months we will be reflecting on the 2012 breeding season and some of the interesting results we have received from some of the young birds we have colour-ringed over the past few years. I have been studying Peregrines in the Bristol and Bath region since 1998, and with the help of others who watch, study and photograph Peregrines, we are developing a bigger and more detailed picture of how these birds live in our towns and cities.

I am linking to our previous blog below which followed some of the comings and goings of the Peregrines in recent years throughout the west region in England. We will now put postings on this current blog but didn't want to lose the stories and information shared on the blog below.