Sex on the Peregrines' minds!

It is that time of the year again - Peregrines are thinking about sex.

Peregrines in urban areas have already been spotted mating, although eggs won't be laid until the middle or end of March. In Bristol, Sam has spotted the city centre pair mating over the past few weeks. It is a great way for the pair to strengthen their bond, and for the male to make sure that when the eggs are laid, he is the daddy!

While Peregrines usually nest in pairs, they will sometimes nip off to mate with other Peregrines - this is known as extra pair copulations, and is common in the bird world from Great tits to Swallows. So, a female's clutch of eggs may not always be fathered by her mate.  For her, it is a great way of making sure her young have the best genes possible, while also having a devoted partner to help her rear them!
On sunny days, Peregrines will also be displaying overhead - lots of soaring, circling, and spectacular dives may be in the offering. While at the nest, the female may be testing things out by shuffling around where the eggs will be laid. You may also hear the pair calling to each other - recently described as 'ee-chupping' by the Derby Peregrines Project, the pair may cheap away, giving the odd light grunt in between.

In terms of prey, the Bristol Peregrines have been feasting on Feral Pigeons, Woodpigeons, and the odd Teal throughout February. As we get into March, prey species migrating back to their breeding grounds, such as Redwings, Woodcock, and Water Rail, will begin to appear in the diet again. The male may even impress the female by bringing her some food, and transferring it to her in the air. It is his way of telling her that he is a good provider, and that he will make sure her and the chicks will be taken care of when they need to be fed.

The first series of BBC Winterwatch aired this month, including a feature on the Bristol peregrines. At just after 17 minutes, I discuss their winter behaviour and some of the finds myself and Ed have made. 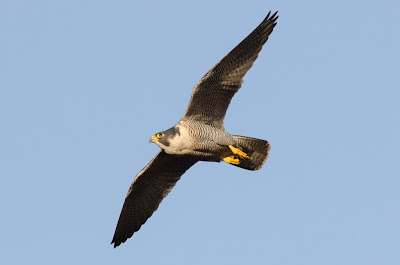 An unseasonably mild start to 2013 saw the Bristol town centre peregrines starting to get excited about the forthcoming breeding season. On the sunnier days, they were pair-bonding, with ledge-displays on or near their scrape and on the morning of the 9th (so warm I saw my first red admiral and bumblebee of the year), they made 3 food-transfers. They were suddenly spending a lot more time on their scrape - ready to defend it from un-paired adults that are moving around the country at this time of year, looking to set up territories.

By mid-January, cold weather from the east had started to move in, bringing a considerable drop in temperatures, and already the pair-bonding in early Jan seemed like a distant memory. On the 16th, I visited the Bath pair and found woodcock, snipe and male and female teal feathers, which with the flock of 80 lapwing I saw overhead heading SW, was a sign of things to come.
By the 19th, heavy snow had dumped across the region and hard weather movements of birds caused a sudden increase in unusual items to turn up in the prey remains. This time it wasn’t just nocturnal migrants the peregrines were hunting either - whilst watching the Bristol town centre pair, I saw flocks of lapwing and golden plover moving SW in the middle of the day and groups of starlings, winter thrushes and skylarks passing through in an almost constant stream.

Skylarks seem to be a particular favourite of peregrines, as I not only found the remains of at least 5 individuals (including a whole wing), I witnessed the Bath tiercel catch one and the Bristol pair bring in 2. They were feeding on the skylarks for over a week, as when the SW passage had finished and the snow was beginning to melt, they had the opportunity to stock-up on them as they were making their return journeys NE.

By the 24th, the snow was nearly gone and temperatures were returning to their seasonal average. In Bath, an intruding flyover adult falcon caused a bit of commotion. Neither resident left their perch, but both were looking skyward and calling at the intruder for a good 10 minutes.
By the end of the month, things have gone full-circle and the Bristol pair are increasingly back on the building they nest on. On the 31st, myself and Ed had a good look around under their perches in town and found snipe, fieldfare and a nice jack snipe skull.
So far in 2013, remains include juv. moorhen, woodcock, snipe, jack snipe, fieldfare, golden plover, skylark, dunlin and many male and female teal in Bristol and woodcock, snipe, skylark and m and f teal in Bath.